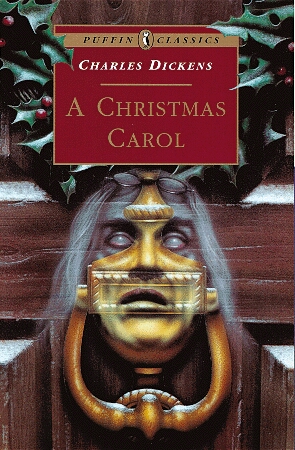 Pathetic fallacy is a term used to describe the attribution of human emotions to the natural world, particularly the weather.  For example, on this bleak December day, we might reasonably look out of the window and across the Westfield path and say:

‘What an utterly miserable day!’

Here, the emotion of misery helps to convey the gloomy characteristics of the weather: grey clouds, a (slight, ever-so-slight) nip in the air, intermittent drizzle.  Miserable, right?  Here’s another example, equally as uncheery, from A Christmas Carol by Charles Dickens:

It was cold, bleak, biting weather: foggy withal: and he could hear the people in the court outside, go wheezing up and down, beating their hands upon their breasts, and stamping their feet upon the pavement stones to warm them.

The quote above is taken from the beginning of the novel.  Ebenezer Scrooge, who is described by Dickens as a ‘squeezing, wrenching, grasping, scraping, clutching, covetous, old sinner’ is sitting alone in his counting-house.  It’s Christmas Eve, a time of celebration and communion, but he has pointedly chosen not to involve himself in the festivities.  And so, here, Dickens uses pathetic fallacy to help  emphasise Scrooge’s famously mean-spirited characteristics.  Like the cold, bleak, biting weather, he is unremittingly joyless.  Bah humbug!

Here’s one more example, this time from Macbeth, by William Shakespeare:

MACBETH: So foul and fair a day I have not seen.

Macbeth’s opening line in Act 1, Scene 3 is a remark about the unpleasant weather conditions.  The day is foul because a storm is raging overhead: thunder, lightning, rain – miserable conditions.  However, it is also fair because Macbeth has recently been victorious in battle.   By setting the scene in this way, Shakespeare is able to create a menacing atmosphere that suggests further dangers, beyond the battlefield, await.  And, indeed, this turns out to be the case: three witches who ‘look not like th’inhabitants o’th’earth’ appear and prophesise Macbeth’s ascent to the Scottish throne.  Although Banquo, his comrade-in-arms, rightly questions the credibility of the prophecies, Macbeth wilfully believes them and becomes ‘rapt withal’ at the prospect of becoming king.  And so, as his mind turns to thoughts of increased power and status, the violence and disharmony in the natural world fittingly reflects the future violence and disharmony in the Scottish political hierarchy.  Watch out, Duncan!

And that’s the end of another bulletin…  However, if you fancy doing some light reading over the holidays, why not download a free copy of A Christmas Carol by clicking on the link below?

TL;DR: Pathetic fallacy is a term used to describe the attribution of human emotions to the natural world, particularly the weather.