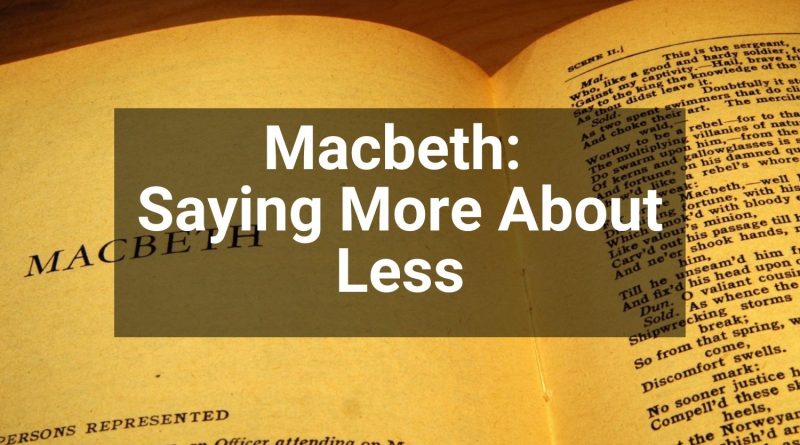 For a while now, I’ve been trying to help the students I teach write a bit more about a bit less.  One of the ways I do this at the moment is to display the ‘Building a Point’ slides a couple of times each week towards the beginning of the lesson.  The idea is for students to form three points based on a single piece of evidence.  Sometimes I ask for formal written responses and sometimes it’s just notes or discussions.

The blue slide in the screenshot contains a ‘finished’ example.  The yellow slides show the ‘clues’ I provide.  Not sure why I included the same slide twice on my tweet – think I must’ve been tired!

Click here to access fourteen different ‘Building a Point’ slides that span the whole play.  They should be easy to adapt.

Trying to get my wards to write a bit more about a bit less. And to make stronger links with contextual factors #TeamEnglish pic.twitter.com/laVR2Ogkk1

The scenes and quotations are below…

A1-S3: Macbeth hopes that ‘chance may crown’ him king

A1-S4: Macbeth appeals to the stars to ‘hide their fires’

A1-S5: Lady Macbeth remarks that the ‘raven himself is hoarse’

A1-S7: Macbeth concedes that Duncan has been ‘so clear in his great office’

A2-S1: Banquo says to Fleance that there’s ‘husbandry in heaven; their candles are all out’

A2-S2: Macbeth doubts that ‘all great Neptune’s ocean’ could wash the blood from his hands

A3-S2: Lady Macbeth tells Macbeth that his ‘noble friends do lack’ him

A4-S2: Macduff’s son cries out to his mother that the murderer has ‘kill’d’ him

A4-S3: Malcolm compares Macbeth to Satan by saying that ‘angels are bright still, though the brightest fell’

A5-S1: Lady Macbeth says that ‘all the perfumes of Arabia will not sweeten’ her hand

A5-S3: Macbeth reflects that he will lack ‘honour, love, obedience, troops of friends’ in his old age