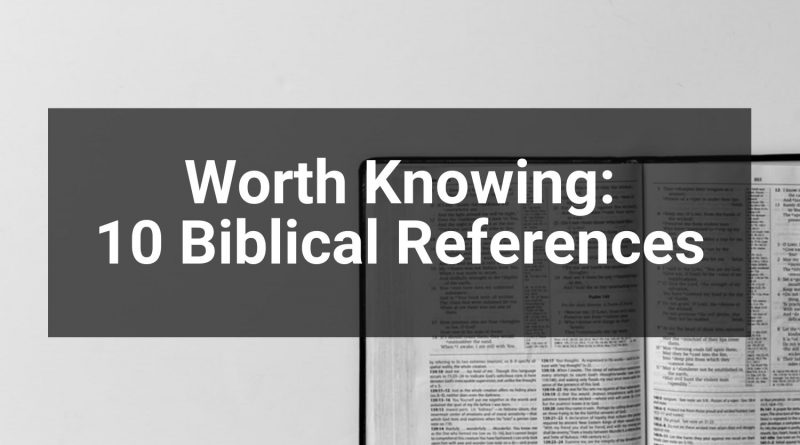 A couple of years ago, I published a series of three posts on classical, biblical and historical allusions – you can access them by clicking here.  This post is a sort of extension to that work, although I’ve chosen quotations and not allusions.

You can access the information on a Word document by clicking here. 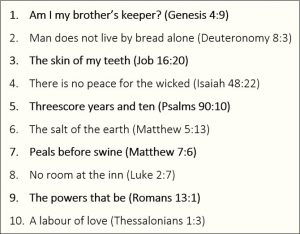 Cain, in a fit of anger and jealousy, killed his brother Abel after failing to receive the recognition that he felt he deserved from God.  Later, God asked Cain where Abel was and he lied by petulantly replying, ‘I do not know; am I my brother’s keeper?’

Useful for sarcastically stating that you are not responsible for a person or their actions.

Satan goaded Jesus by challenging him to transform stones into bread.  Jesus refused and, instead, responded by referring to the Old Testament Book of Deuteronomy: ‘Man shall not live by bread alone, but by every word that proceeds from the mouth of God.’

Useful for highlighting that we need more than basic nourishment (i.e. food) to live a fulfilled life; this could mean something abstract like religious faith and love or something more materialistic like luxury items.

Job underwent a long, intense period of mental and physical suffering as Satan attempted to test his faith in God.  In a moment of despair, he lamented, ‘My bone cleaveth to my skin and to my flesh, and I am escaped with the skin of my teeth.’  The ‘skin’ of Job’s teeth is probably a reference to the enamel and not actual skin.  However, it could possibly refer to his protruding gums.

Useful for highlighting an escape or a success that has been achieved by a particularly narrow margin.

The words reflect God’s denouncement of evil and his promise of spiritual peace for those who remain faithful and pursue only that which is deemed good.

Useful for emphasising a feeling of tiredness or for signalling excessive workload and general busyness (‘peace’ is usually substituted for ‘rest’).

A score is twenty years.  So, in total, threescore years and ten equals seventy, and refers to what was formerly the length of an expected lifespan.

Useful for expressing a long period of time or a significant amount of experience.

Salt was a particularly valuable commodity used for preserving and flavouring food.  Jesus chose the metaphor to emphasise the importance of his disciples when he spoke to them during the Sermon on the Mount.

Useful for highlighting that someone is innately good, and especially trustworthy and kind.

During the Sermon on the Mount, Jesus urged his disciples not to waste their time preaching the gospel to those who would scornfully refuse to listen.

Useful for describing moments when good advice is foolishly ignored.

Mary and Joseph were unable to find a room to sleep in when they arrived in Bethlehem.  Instead, they spent the night in a stable and Jesus was eventually born.

Useful for indicating that a room or event is full.

Paul the Apostle encouraged his followers to respect the authority of ‘the powers that be’ (i.e. their rulers), irrespective of whether or not they agreed with the decisions they made because, in his justification, all power is ultimately ‘ordained’ by God.

Useful for impolitely referring to individuals or groups of people who possess authority.

A ‘labour of love’ is effortful work done freely and without financial recompense.  In the Bible, Paul the Apostle uses the phrase to encourage acts of kindness and forgiveness and, more broadly, to highlight the importance of spreading the gospel.

Useful for describing intrinsic motivation for work that might reasonably be considered hard and time-consuming.